Unsurprisingly there were some significant changes to the progression of the project this week.  Before the switch to online classes was announced, I completed two things for this project, pertaining to the aspect which was slightly behind schedule, the gigabit ethernet.

The Numato PHY was ordered last week, but had not come in by Wednesday, so I decided to freehand solder the ADIN1300 sample that we already had.

The ultimate purpose of this was to debug the RGMII implementation, which should be a lot easier, since we have a full datasheet for the ADIN1300.  To this end, I added a microcontroller to communicate with it over the MDIO interface.

By looking at the errors that came up when attempting to use it, I eventually found that some of the bits were backward (forward for RGMII, but ethernet is lsb first, so the preamble and CRC were backward, though the payload was correct).  Also the CRC computation was slightly off.  Both of these issues were fairly easy to fix, and the end result was that I was able to send UDP packets to my computer. 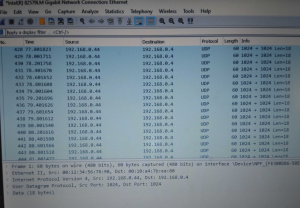 Applying these changes to the other board (the RV901), got it working as well.  Given the interruption to everything from Corona and that this is working as is, we’ll probably end up using this board for the final device to save time.

The day after I got this working was when all the Corona stuff really started kicking off, so I haven’t gotten much further than this.  I did start on the microphone carrier boards, but the design of that may have to change to deal with suppliers (possibly) not being open.