This week significant progress made in all areas of the project, including the hardware/FPGA component catching back up to the planned timeline.

To prepare for the midpoint demo on Monday, all group members have been working on getting some part of their portion of the project to the point where it can be demonstrated.  John has a working pipeline to get microphone data through the FPGA and into logfiles, Sarah has code working to read logfiles and do some basic processing, and Ryan has developed math and code that works with Sarahs to recover the original audio.

While at this point the functionality only covers basic direction-finding, this bodes well for the overall functionality of the project once we have more elements and therefore higher gain, directionality, and the ability to sweep in two dimensions.  The images below show basic direction-finding, with sources near 15 degrees from the element axis (due to the size of the emitter, placing it at 0 was impossible), and near 90 degrees to the elements.  The white line plots amplitude over angle, and so should peak around the direction of the source, which it does: 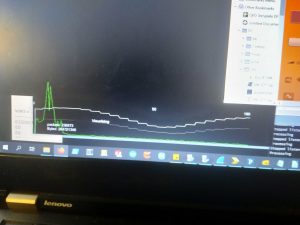 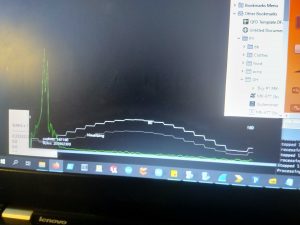 This coming week should see significant progress in the hardware, as we now have all materials required, continued refinement of the software, as most of the major components are now in place.